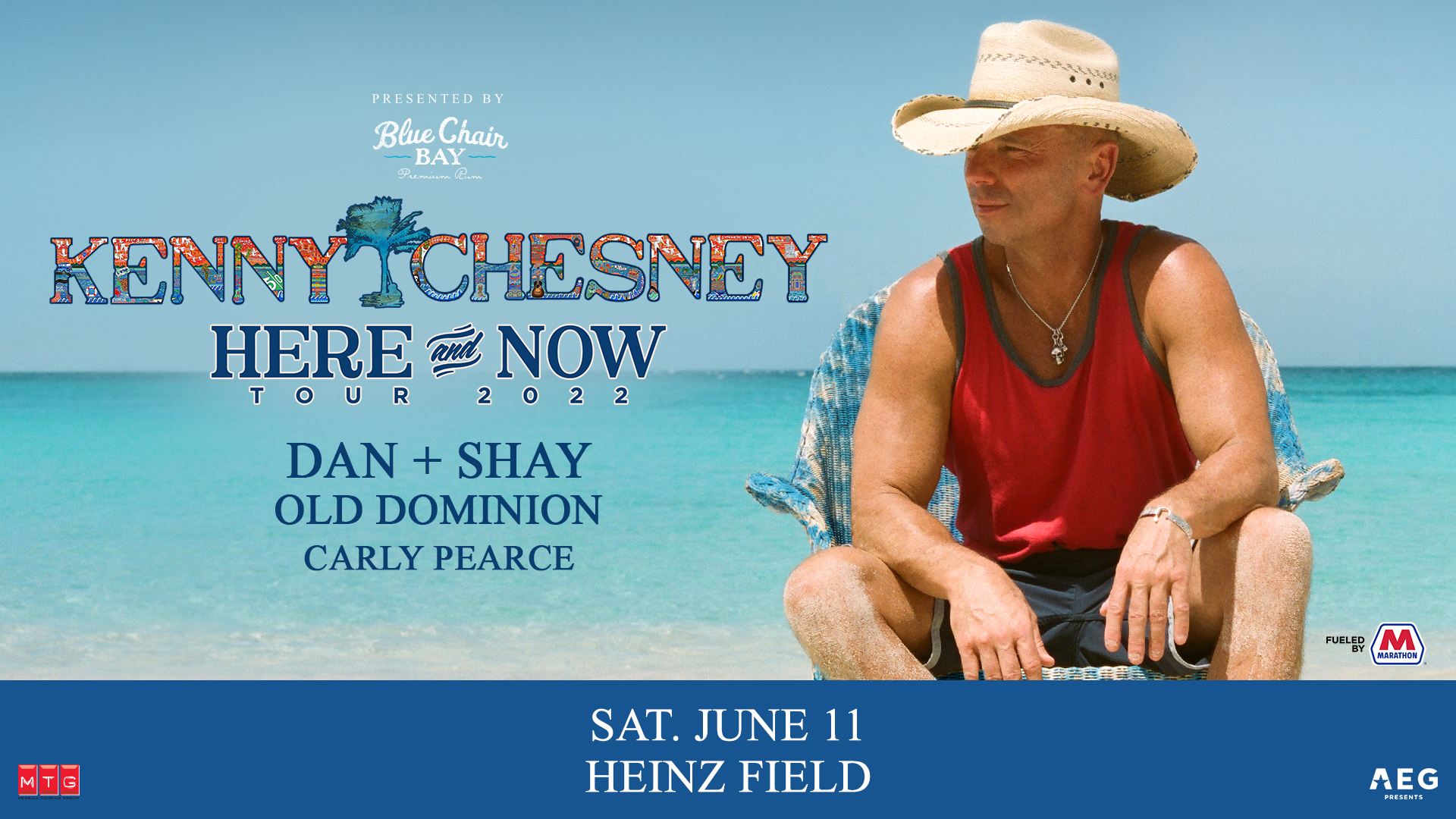 KENNY CHESNEY GEARS UP FOR HERE AND NOW 2022

NASHVILLE, Tenn. – “When we realized we weren’t getting to spend 2020 with No Shoes Nation, I never thought it would be three years until I would see my most favorite people in the world,” says eight-time Entertainer of the Year Kenny Chesney ahead of his Here And Now 2022 stadium tour presented by Blue Chair Bay Rum and fueled by MARATHON, set to launch April 23 at Tampa’s Raymond James Stadium. “My favorite place in the world is anywhere we all come together. They come strong. They get loud. They love the music. But most importantly, they live life – every second – for all its worth! They inspire me, and I want to get out there and get going, creating the greatest night of the summer every time we hit the stage.

“Putting this line-up together has been awesome,” Chesney continues. “We’ve got Dan + Shay, who continue to set records with their music and have been burning it up on their own headlining tour this year. We have an old favorite, who just keep getting better, Old Dominion – it’s almost like it wouldn’t be a stadium show without them! – and one of my newest friends in Carly Pearce, whose songwriting is so personal to her own life, yet so many people find themselves in her songs.”

Chesney, the only Country artist on Pollstar’s Top Touring Artists of the Decade, wanted to bring the people who come out every summer the very best show possible. It meant a lot of mixing, matching and sorting potential line-ups to arrive at this group that will keep people feeling good and give them several different performances throughout the evening.

Starting with Pearce, a current CMA Female Vocalist and Album of the Year nominee, the show kicks off with a woman who honed her skills as a teen doing five shows a day at Dollywood and has since topped the charts at Country radio. Following Pearce is No Shoes Nation favorites Old Dominion, the reigning four-time ACM and three-time CMA Vocal Group of the Year, as the momentum just keeps building. Rounding out the opening sets are Dan + Shay, the duo who have shattered streaming records and created their own lane of soul meets smooth Country with hits such as “10,000 Hours,” “Speechless” and “Tequila,” as they take their power of positive energy to new levels.

“No matter who you are,” Chesney says, “someone who’s been coming since the very beginning or is curious what the fuss is all about, I wanted to give No Shoes Nation the best lineup of music that’s gonna give them the kind of celebratory night we all deserve after waiting so long.”

Kicking off April 23 in Tampa, Fla. at Raymond James Stadium, Chesney will play 21 stadium concerts, finishing Here And Now 2022 with what has almost become a No Shoes Nation tradition: a double-play at New England’s Gillette Stadium in Foxborough, Mass. on August 26 and 27. All current ticketholders remain in their original seats at each stadium.

To celebrate the news of the Here And Now 2022 lineup, the 19 stadium shows already announced are getting “Five Day Party Pricing,” to honor those fans who normally attend multiple shows each summer with limited discounted tickets at multiple price points igniting the Here And Now 2022 summer. To make it super-easy, no codes, no clubs, no special sign-ups and prices will already reflect any discounts. Just look for the price that fits your party now through Nov. 5.

“Let’s make this simple!” Chesney says. “It’s been a long time. No Shoes Nation moves around, shows up in lots of cities. So, to say thank you for being the most awesome people in the world, I thought this was a way to recognize the people who do more than one or two stadiums each summer!”

Here And Now 2022 presented by Blue Chair Bay Rum and fueled by MARATHON picks up where one of contemporary music’s greatest love affairs left off. Having sold over a million tickets every year since 2002, Chesney is ready to get back out there – and he’s bringing a few of his very best musical friends with him.

For more information and to purchase tickets to all dates, visit www.KennyChesney.com.

Dan + Shay’s mark on country music – and beyond – grows with their highly-anticipated fourth studio album, Good Things. Produced by the duo’s Dan Smyers and featuring their current single “Steal My Love,” the imaginative LP is the first Country album in the streaming era to achieve RIAA Gold certification at release. The album’s first single, 4x Platinum multi-week No. 1 hit “10,000 Hours” (with Justin Bieber), has nearly two billion global streams and became the biggest first-week streaming total in country music history. Their latest No.1, “Glad You Exist,” their sixth consecutive chart-topper, has surpassed 1.4 million track equivalents. This year, they became the first and only artist to win the GRAMMY Award for Best Country Duo/Group Performance 3x consecutively since the category’s inception and they have garnered more than eight billion global career streams to date. The reigning 3x ACM Duo of the Year are currently nominated for CMA Vocal Duo of the Year, which they have claimed the past two consecutive years, as well as all-genre Group of 2021 and Country Artist of 2021 at the People’s Choice Awards and Favorite Country Duo or Group at the American Music Awards. Their Platinum-certified self-titled third album included global hit “Tequila” (6x Platinum, 1.3+ billion global streams), multi-format hit “Speechless” (5x Platinum, 1.2+ billion global streams) and No.1 “All To Myself” (2x Platinum). In the eight years since they formed, Dan + Shay have accumulated 40 total RIAA certifications and achieved nine No. 1 singles at Country radio.

Old Dominion has emerged as one of the hottest breaking bands out of Nashville, fusing clever lyrics and an infectious sound. Their lyrical wit and hook heavy songwriting has certainly proved a winning method: since breaking onto the music scene in 2014, the band has notched eight No. 1 singles at country radio, surpassed one billion on-demand streams, earned several Platinum and Gold single certifications and headlined arenas and amphitheaters around the globe. In 2020, the band received their first two GRAMMY nominations for Best Country Duo/Group Performance and Best Country Song, for their hit single “Some People Do” from their self-titled third studio album. Old Dominion are currently the reigning CMA and ACM Group of the Year. Most recently, the band earned their fourth consecutive “Group of the Year” win at the 56th Annual ACM Awards and have been nominated for Vocal Group of the Year for the 2021 CMA Awards. The group also recently notched a nomination Favorite Duo/Group – Country for the 2021 American Music Awards. In October 2021, the band released their stunning fourth studio album Time, Tequila & Therapy, which features smash summertime single “I Was On A Boat That Day.”

Fiercely rooted in the classics, the girl who left her Kentucky home and high school at 16 to take a job at Dollywood has grown into a woman who embraces the genre’s forward progression and is confident in what she wants to say. In a full circle surprise, iconic superstar and Grand Ole Opry member Dolly Parton extended the coveted invitation to Carly after 85+ appearances. Lighting a fire with her debut album Every Little Thing and the Platinum-certified history making title track, Pearce’s Double-Platinum-certified “I Hope You’re Happy Now” with Lee Brice, won both the CMA and ACM Vocal Event award, as well as the ACM 2021 Single of the Year. A committed songwriter, she believes truth and songs are the greatest form of resilience, whether facing the loss of her longtime champion and producer Busbee or the break-up of her marriage. Teaming with Shane McAnally and Josh Osborne to create the in-the-moment 29, their creative dialogue turned into the 15-song 29: Written In Stone. 29: Written In Stone traces the arc of realizing, accepting and moving on wiser for the experience. Leading the collection is “Dear Miss Loretta,” a from-the-heart outreach to Country Music Hall of Famer Loretta Lynn, and the pained ballad features fellow Kentucky icon Patty Loveless. Her current single, “Never Wanted To Be That Girl,” is a duet with Ashley McBryde that the two female singer/songwriters penned for the project.